We’re moving on!
Join us at www.hcp.novartis.com—our new location for health care professionals to find product, access, and medical information. Now you can find the tools you need to help manage your patients, all in one place!

You’ll have access to the site in a moment, or click continue to close this message and advance directly to the site.

Indication PIQRAY is indicated in combination with fulvestrant for the treatment of postmenopausal women, and men, with hormone receptor (HR)-positive, human epidermal growth factor receptor 2 (HER2)-negative, PIK3CA-mutated, advanced or metastatic breast cancer as detected by an FDA-approved test following progression on or after an endocrine-based regimen. 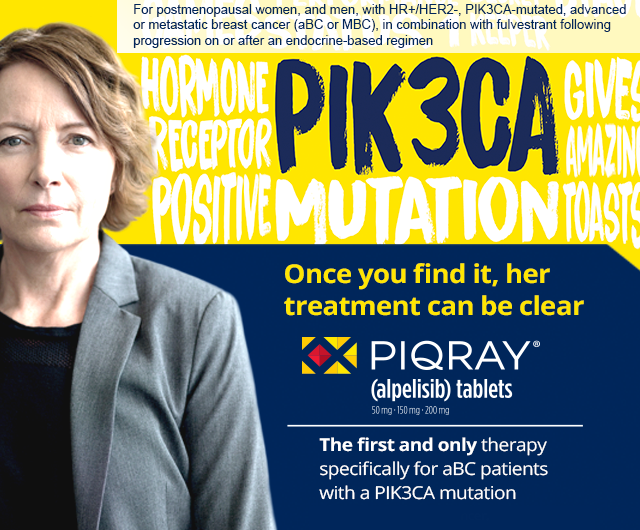 PIQRAY® (alpelisib) tablets is indicated in combination with fulvestrant for the treatment of postmenopausal women, and men, with hormone receptor (HR)-positive, human epidermal growth factor receptor 2 (HER2)-negative, PIK3CA-mutated, advanced or metastatic breast cancer as detected by an FDA-approved test following progression on or after an endocrine-based regimen.

PIQRAY is contraindicated in patients with severe hypersensitivity to it or any of its components.

Severe Cutaneous Adverse Reactions (SCARs): SCARs including Stevens-Johnson syndrome (SJS), erythema multiforme (EM), toxic epidermal necrolysis (TEN), and drug reaction with eosinophilia and systemic symptoms (DRESS) can occur in patients treated with PIQRAY. In the SOLAR-1 study, SJS and EM were reported in 0.4% and 1.1% of patients, respectively. DRESS was reported in patients in the postmarketing setting. If signs or symptoms of SCARs occur, interrupt PIQRAY until the etiology of the reaction has been determined. Consultation with a dermatologist is recommended.

If a SCAR is confirmed, permanently discontinue PIQRAY. Do not reintroduce PIQRAY in patients who have experienced previous SCARs during PIQRAY treatment. If it is not confirmed, PIQRAY may require dose modifications, topical corticosteroids, or oral antihistamine treatment.

Advise patients of the signs and symptoms of SCARs (eg, a prodrome of fever, flu-like symptoms, mucosal lesions, progressive skin rash, or lymphadenopathy).

Based on the severity of the hyperglycemia, PIQRAY may require dose interruption, reduction, or discontinuation. Advise patients of the signs and symptoms of hyperglycemia (eg, excessive thirst, urinating more often than usual or higher amount of urine than usual, or increased appetite with weight loss).

In patients who have new or worsening respiratory symptoms or are suspected to have developed pneumonitis, interrupt PIQRAY immediately and evaluate the patient for pneumonitis. Consider a diagnosis of noninfectious pneumonitis in patients presenting with nonspecific respiratory signs and symptoms such as hypoxia, cough, dyspnea, or interstitial infiltrates on radiologic exams and in whom infectious, neoplastic, and other causes have been excluded by means of appropriate investigations.

Diarrhea: Severe diarrhea, including dehydration and acute kidney injury, can occur in patients treated with PIQRAY. Most patients (58%) experienced diarrhea during treatment with PIQRAY. Grade 3 diarrhea occurred in 7% (n=19) of patients. Based on the severity of the diarrhea, PIQRAY may require dose interruption, reduction, or discontinuation. Advise patients to start antidiarrheal treatment, increase oral fluids, and notify their health care provider if diarrhea occurs while taking PIQRAY.

Reference: 1. Referenced with permission from the NCCN Clinical Practice Guidelines in Oncology (NCCN Guidelines®) for Breast Cancer V.6.2020. © National Comprehensive Cancer Network, Inc. 2020. All rights reserved. Accessed September 9, 2020. To view the most recent and complete version of the guideline, go online to NCCN.org.

NCCN makes no warranties of any kind whatsoever regarding their content, use, or application and disclaims any responsibility for their application or use in any way.

You are now leaving the Novartis site and moving to an external website independently operated and not managed by Novartis Pharmaceuticals Corporation. Novartis assumes no responsibility for the site. If you do not wish to leave this site, click Cancel. Or click OK to continue.