We’re moving on!
Join us at www.hcp.novartis.com—our new location for health care professionals to find product, access, and medical information. Now you can find the tools you need to help manage your patients, all in one place!

You’ll have access to the site in a moment, or click continue to close this message and advance directly to the site.

VOTRIENT® (pazopanib) tablets is indicated for the treatment of adults with advanced renal cell carcinoma (RCC). 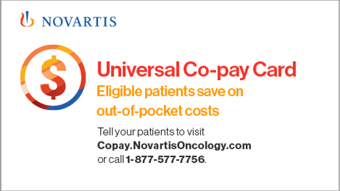 Patients may be eligible for immediate co-pay savings on their next prescription of VOTRIENT.

*Limitations apply. This offer is only available to patients with private insurance. The program is not available for patients who are enrolled in Medicare, Medicaid, or any other federal or state health care program. Novartis reserves the right to rescind, revoke, or amend this program without notice. For full Terms and Conditions, visit Copay.NovartisOncology.com or call 1-877-577-7756.

Encourage your patients to find out if they are eligible to enroll in the Novartis Oncology Universal Co-pay Program by visiting Copay.NovartisOncology.com or calling 1-877-577-7756.

Low to no co-pay for Medicare patients taking VOTRIENT:

Patient Assistance Now Oncology (PANO) is a support center consisting of insurance specialists and case managers who provide access to information regarding an array of services. Consider PANO your first stop for information about Novartis Oncology Patient Support services. Dedicated support specialists help direct callers to the services that best fit their needs.

The right support at the right time

To learn more about what Novartis Oncology Patient Support can offer your patients, call 1-800-282-7630 or visit HCP.Novartis.com/Access.

The VOTRIENT® (pazopanib) tablets 14-Day Free Trial helps eligible patients start therapy quickly. A 14-day supply is shipped directly to a patient’s home or another convenient location. This 1-time 14-day trial is available to all patients prescribed VOTRIENT for a US Food and Drug Administration (FDA)-approved indication without regard to purchase of VOTRIENT or any other product.

This voucher provides patients access to a free 14-day trial of VOTRIENT from the pharmacy.*

*To activate this voucher, the patient must call the number listed on the voucher (1-800-282-7630) and follow the instructions. Once activated, the voucher can be presented at the pharmacy along with a valid prescription to obtain a free 14-day supply of VOTRIENT.

Note: Eligible patients may only utilize either the 14-Day Trial or the Day 1 Voucher (which also provides a 14-day supply of VOTRIENT), but NOT both.

VOTRIENT® (pazopanib) tablets is indicated for the treatment of adults with advanced renal cell carcinoma (RCC).

Hepatic Toxicity: Severe and fatal hepatotoxicity has occurred. Patients older than 65 years are at an increased risk. Increases in serum transaminase levels (alanine aminotransferase [ALT], aspartate aminotransferase [AST]) and bilirubin were observed. Transaminase elevations occur early in the course of treatment (92.5% of all transaminase elevations of any grade occurred in the first 18 weeks). Mild, indirect (unconjugated) hyperbilirubinemia may occur in patients with Gilbert’s syndrome. In patients with preexisting moderate hepatic impairment, the starting dose of VOTRIENT should be reduced to 200 mg per day or alternatives to VOTRIENT should be considered. Treatment with VOTRIENT is not recommended in patients with severe hepatic impairment. Concomitant use of VOTRIENT and simvastatin increases the risk of ALT elevations and should be undertaken with caution [see Drug Interactions]. Before the initiation of treatment and regularly during treatment, monitor hepatic function and interrupt, reduce, or discontinue dosing as recommended.

QT Prolongation and Torsades de Pointes: Prolonged QT intervals and arrhythmias, including torsades de pointes, have occurred. Use with caution in patients with a history of QT interval prolongation, patients taking antiarrhythmics or other medications that may prolong QT interval, and those with relevant preexisting cardiac disease. Baseline and periodic monitoring of electrocardiograms and maintenance of electrolytes (eg, calcium, magnesium, potassium) within the normal range should be performed. Correct hypokalemia, hypomagnesemia, and hypocalcemia prior to initiating VOTRIENT and during treatment.

Venous Thromboembolic Events (VTEs): VTEs, including venous thrombosis and fatal pulmonary embolus (PE), have occurred. In the randomized RCC trial, VTEs were reported in 1% of patients treated with VOTRIENT. Monitor for signs and symptoms of VTE and PE. Withhold VOTRIENT and then resume at the same dose, or permanently discontinue, based on severity of VTE.

Thrombotic Microangiopathy (TMA): TMA, including thrombotic thrombocytopenic purpura (TTP) and hemolytic uremic syndrome (HUS), has been reported in clinical trials of VOTRIENT as monotherapy, in combination with bevacizumab, and in combination with topotecan. VOTRIENT is not indicated for use in combination with other agents. Six of the 7 TMA cases occurred within 90 days of the initiation of VOTRIENT. Improvement of TMA was observed after treatment was discontinued. Monitor for signs and symptoms of TMA. Permanently discontinue VOTRIENT in patients developing TMA. Manage as clinically indicated.

Interstitial Lung Disease (ILD)/Pneumonitis: ILD/pneumonitis, which can be fatal, has been reported in 0.1% of patients in the clinical trials treated with VOTRIENT. Monitor patients for ILD/pneumonitis, and discontinue VOTRIENT if symptoms of ILD or pneumonitis develop.

Posterior Reversible Encephalopathy Syndrome (PRES): PRES has been reported in patients who received VOTRIENT and may be fatal. PRES is a neurologic disorder, which can present with headache, seizure, lethargy, confusion, blindness, and other visual and neurologic disturbances. Mild to severe hypertension (HTN) may be present. Confirm diagnosis of PRES by magnetic resonance imaging.

Hypertension: HTN, including hypertensive crisis, has occurred in clinical trials. HTN occurs early in the course of treatment (approximately 40% of cases occurred by Day 9, and 90% of cases occurred in the first 18 weeks). Do not initiate VOTRIENT in patients with uncontrolled HTN. Optimize BP prior to initiating VOTRIENT. Monitor BP as clinically indicated, and initiate and adjust antihypertensive therapy as appropriate. Withhold and then dose reduce VOTRIENT, or permanently discontinue, based on severity of HTN. Approximately 1% of patients required permanent discontinuation of VOTRIENT because of HTN.

Hypothyroidism: Hypothyroidism was reported in 7% of 290 patients treated with VOTRIENT in the randomized RCC trial. Monitor thyroid tests at baseline, during treatment, and as clinically indicated. Manage hypothyroidism as appropriate.

Proteinuria: In the randomized RCC trial, proteinuria was reported as an adverse reaction (AR) in 9% of 290 patients receiving VOTRIENT, leading to treatment discontinuation in 2 patients. Perform baseline and periodic urinalysis during treatment with follow-up measurement of 24-hour urine protein as clinically indicated. Withhold VOTRIENT, then resume at a reduced dose, or permanently discontinue, based on severity of proteinuria. Permanently discontinue in patients with nephrotic syndrome.

Tumor Lysis Syndrome (TLS): Cases of TLS, including fatal cases, have been reported in patients with RCC treated with VOTRIENT. Patients may be at risk of TLS if they have rapidly growing tumors, a high tumor burden, renal dysfunction, or dehydration. Closely monitor patients at risk, consider appropriate prophylaxis, and treat as clinically indicated.

Infection: Serious infections (with or without neutropenia), some with fatal outcomes, have been reported. Monitor for signs and symptoms, and treat active infection promptly. Consider interruption or discontinuation of VOTRIENT.

Embryo-Fetal Toxicity: VOTRIENT can cause fetal harm when administered to a pregnant woman based on animal reproduction studies and its mechanism of action. In animal developmental and reproductive toxicology studies, oral administration of pazopanib to pregnant rats and rabbits throughout organogenesis resulted in teratogenicity, and abortion at systemic exposures lower than that observed at the maximum recommended human dose of 800 mg.

Diarrhea: Diarrhea occurred frequently and was predominantly mild to moderate in severity. Patients should be advised how to manage mild diarrhea and to notify their health care provider if moderate to severe diarrhea occurs so appropriate management can be implemented to minimize its impact.

Lipase Elevations: In a single-arm RCC trial, increases in lipase values were observed for 27% of 181 patients. In the RCC trials of VOTRIENT, clinical pancreatitis was observed in <1% (4/586) of patients.

Pneumothorax: Two of 290 patients treated with VOTRIENT and no patients on the placebo arm in the randomized RCC trial developed a pneumothorax.

Bradycardia: In the randomized trial of VOTRIENT for the treatment of RCC, bradycardia based on vital signs (<60 beats per minute) was observed in 19% of 280 patients treated with VOTRIENT and in 11% of 144 patients on the placebo arm.

Drug Interactions: Coadministration with strong CYP3A4 inhibitors (eg, ketoconazole, ritonavir, clarithromycin) increases concentrations of pazopanib and should be avoided, but, if warranted, reduce the dose of VOTRIENT to 400 mg. Avoid grapefruit and grapefruit juice.

Concomitant use of strong CYP3A4 inducers (eg, rifampin) should be avoided due to the potential to decrease concentrations of pazopanib. VOTRIENT should not be used in patients who cannot avoid chronic use of CYP3A4 inducers.

Concomitant treatment with strong inhibitors of P-glycoprotein (PgP) or breast cancer resistance protein (BCRP) should be avoided due to risk of increased exposure to pazopanib.

CYP Substrates: Concomitant use of VOTRIENT with agents with narrow therapeutic windows that are metabolized by CYP3A4, CYP2D6, or CYP2C8 is not recommended. Coadministration may result in inhibition of the metabolism of these products and create the potential for serious ARs.

Drugs That Raise Gastric pH: Avoid concomitant use of VOTRIENT with drugs that raise gastric pH (eg, esomeprazole) due to the potential to decrease concentrations of pazopanib. Consider short-acting antacids in place of proton pump inhibitors (PPIs) and H2-receptor antagonists. Separate antacid and pazopanib dosing by several hours.

Adverse Reactions in the Randomized RCC Trial: A dose interruption was required for 42% of patients on VOTRIENT. The VOTRIENT dose was reduced for 36% of patients.

You are now leaving the Novartis site and moving to an external website independently operated and not managed by Novartis Pharmaceuticals Corporation. Novartis assumes no responsibility for the site. If you do not wish to leave this site, click Cancel. Or click OK to continue.